Chief Joseph Ford was sworn in as chief of police of the Countryside Police Department on May 8, 2013. He began his police career with the Burbank Police Department where he served for over 30 years. During his tenure at Burbank, Chief Ford rose through the ranks ultimately reaching the rank of Division Chief where he oversaw operations of the patrol and investigation division. Over the span of his career, Chief Ford wore many hats including DARE Officer, Gang Specialist, Evidence Technician, Detective, Public Information Officer, Field Training Officer and also Juvenile Officer.

Chief Ford is a graduate of St. Laurence High School, and earned a Bachelor of Science Degree in Administration of Justice from Southern Illinois University in 1982. Chief Ford attended the Cook County Sheriffs Police Academy in 1983 after being hired by the newly formed Burbank Police Department. In 1996 Chief Ford returned to school earning a Master’s Degree in Criminal Justice from Chicago State University. Chief Ford is also a graduate of Northwestern University Traffic Institute’s School of Police Staff and Command and is a graduate of the FBI National Academy Session 242 in Quantico, Virginia. Chief Ford was also an Adjunct Professor at Moraine Valley Community College for over 16 years. Chief Ford is a member of the International Chiefs of Police, Illinois Chiefs of Police, South Suburban Chiefs of Police, FBI National Academy Association, and currently serves as Chairman of the South Suburban Major Crimes Task Force and the Major Case Assistance Team.

He has been married to his wife Connie for over 30 years and has three adult children, Addison, Colton, and Sheridan.  He is also a very proud grandfather of Calvin Luca Dalio Ford. 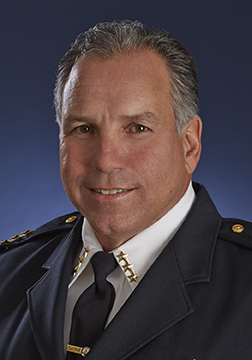